In the middle of July, Russian aviation authority issued a certificate for the new cargo company, which is registered in Khabarovsk, and will operate under the E-Cargo brand. Thus, in the market of cargo air transportation of Russia there will be one more airline. At the moment the company operates one medium-haul Boeing-757-200F with the registration number VP-BHM. 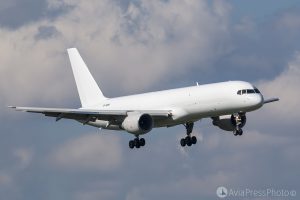 In the future, E-Cargo will expand its fleet to 5 aircraft of this type. According to the head of the company Andrei Chuprov, this aircraft is one of the best parameters of economic efficiency and the ratio of “flight range – commercial load.”

The company carried out its first commercial flight on July 26 from Domodedovo to airport Pevek, and on July 30 the board returned to the airport Vnukovo. Soon the company’s route network will connect Moscow, Siberia, the Urals, the Far East and China.

“E-Cargo” in the future can enter the top five largest cargo air carriers in Russia. This is facilitated, among other things, by the lack of competition in the Russian medium-haul market. The largest Russian medium-haul liner operator, which could compete with E-Cargo, is Aviastar-TU. At the moment, three of its Tu-204-100S liners are already carrying out transportation in the interests of “Russian Post” and “DHL”, and only one aircraft of this company is free for the market. The largest cargo carrier of Russia “AirBridgeCargo” mainly deals with transit traffic on international flights. Another large company, Volga-Dnepr, is focused on delivering large-sized and non-standard cargo. Consequently, the company “E-Cargo” can soon take its unique part in the Russian market of freight traffic.