August 4 at the International Airport of Zhukovsky took place a significant event for aviation enthusiasts. Two legends of Soviet aviation – the regional airliner Tu-134 and the world’s first supersonic passenger aircraft Tu-144 – were standing next to each other. The uniqueness of this event is that the last time two of these aircraft could be seen together 40 years ago – in the summer of 1978 the commercial operation of the Tu-144 was completed.

During the action, the participants who got on board the Tu-134 flew the Vnukovo-Zhukovsky route. After takeoff from Vnukovo, the crew performed a flight around Moscow, showing the passengers from a height of just over 1000 meters the capital and its three air harbors: Vnukovo, Domodedovo and Sheremetyevo.

An hour after takeoff, an elegant silhouette of a Soviet airliner appeared over Zhukovsky airport. The crew of the Tu-134 made a spectacular pass at a low altitude above the runway of the airport, greeting the photographers and journalists gathered below. After landing the plane was met by a water salute.

Tu-134 was a very popular aircraft in the Soviet Union. However, now this liner is extremely rare to be found on regular passenger lines, and it gradually goes down in history. Therefore, aviation enthusiasts showed such a high interest in this event – the chance to fly on the famous “whistle” falls out infrequently. 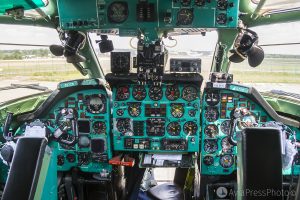 Soon, another participant of the event – Tu-144 appeared on the territory of the airport. The water salute at the entrance to the platform is a tribute to the huge team that created the unique airplane and gave it a chance to live. Having completed its first flight on December 31, 1968, this aircraft became the first supersonic passenger liner in the world, ahead of the “Concorde” for several months. 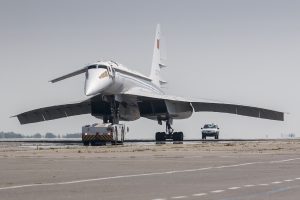 Tu-144 took its place in the parking position, and now everyone can touch the legend of the world aviation. Participants of the show hope that one day this liner will become part of the memorial complex in Zhukovsky. 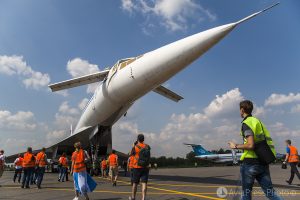